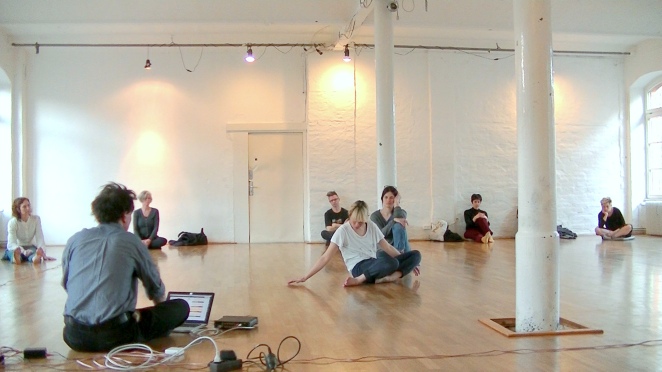 2015 saw the last Freistil programme in its nine years of life. With its focus on improvised performance, this monthly series, curated by Heide Moldenhauer and hosted by Tanzfabrik, can be considered  a pioneering classic in the Berlin instant-composition scene. Although the proliferation of programmes focussing on instantly-composed dance and other performance forms is a happy fact (impro-per-arts, berlin arts united, Imprevú, Musiktanznulldreissig, IKS, Petunien), it would have been sad to lose this event and its unique Sunday afternoon feel. Ingo Reulecke has not allowed the trajectory and impulse of Freistil to die out and, adding specifity to the concept, has presented the newborn Common Ground – Music meets Dance – the first Sunday of the month at 18h in Tanzfabrik. The format includes an open conversation at the end which quickly became a lively and very focussed exchange on how this meeting between music and dance takes place.

The first encounter on this common ground took place last Sunday, April 3rd and presented a double bill: the first set was an established duet, Akemi Nagao (dance) and Michael Tuttle (electro-acoustic, laptop). The second set was an ad hoc trio: Britta Schönbrunn and Ingo Reulecke (dance) and Liz Allbee (trumpet). The space was open, with no division between audience and performers, and there was an easygoing atmosphere between sets and between performance and the ensuing conversation, which will be an integral part of the format. The atmosphere contributed to the conversation being an honest and open exchange, in which we could go beyond patting ourselves in the back and through to questioning, disagreeing and talking about challenges and difficulties.

The umbrella question of how does one go about bringing music and dance together got the wheels turning. Michael and Akemi put the accent on leaving space for each other: by doing nothing, by reducing the potency or amount of variation in the material or, as Akemi pointed out, by doing so much that it becomes nothing as, sometimes, remaining still can be an even more powerful image than any movement. Given that movement and sound are perceived through different sensory channels, the question was raised of whether this was necessary. As Ingo pointed out, synesthetic perception is not all that rare, and many dancers can “hear” movement. Even if the audience does not experience it this way, external sound could be for a dancer the equivalent of a musician being deafened to their own playing by another’s monitor. Liz later pointed out that, regardless of what the channels are, the issue is to compose one thing together, even if fellow performers respond in a language different to our own. Pre-performance practice or not was also touched upon, as both options had been featured in the programme. The chance to connect, even if the performance is a first meeting, may be found in many ways; even, as Britta said, through the breath. This lowest common denominator can be enough of a springboard in any meeting between one and an-other, the most basic and unarguable source feeding us all.

Indeed, simultaneous generation in the same time-space field, makes tracing causality a challenge to say the least. The sounds generated by the movement and the movements generated by the musicians, particularly when their instruments allow for travelling, coexist inevitably. These incursions make the weave even richer with juxtapositions which we may have learned to see as incongruous but which emerge naturally in front of us exerting the fascination of an unlikely and unforeseen event that, once witnessed, seems to have always been destined to happen.

One thought on “common ground #1”